If God is real, then what?

The question was posed last year as IF:Gathering began. Tens of thousands of women around the world gathered once again to learn, to listen, and to lean in together this weekend. If God is real…

The speakers shared truth. The worship ushered us into the sweet presence of Jesus. The story of Joshua was lifted up by dozens of voices throughout the gathering. But there’s one message in particular that grabbed my heart and immediately I couldn’t wait to share you. I sure don’t have this figured out (not that I ever really do) and so let’s just pretend there are coffees in front of us and we’re simply together to talk about what God is whispering in our hearts.

There’s this guy named Joshua and he’s kind of a really big deal in the Bible. I mean, the guy followed after Moses as the leader of the Israelites. You could say the dude had some big shoes to fill. And there are so many different stories of his trust in the Lord and his faithfulness to believe what God said but there was that one time God said walk and Joshua did – and it was a little crazy, if I’m being honest.

Well, maybe not just a little. Try “kind of really strange and odd and also crazy.”

We walk. In life, through joys and struggles, we all just keep walking into the next day.

But Joshua was leading the Israelites into battle and God said walk. Not “fight” or “prepare” or “bring sacrifices.” He didn’t ask them to write a blog post or tweet an encouraging verse or phone a friend.

Walk. Believe. Stay with it.

Friend, I don’t know what battle you’re walking into or the fight you’re in right now, but I believe you need this word from God, this reminder that God did not leave you in the desert to aimlessly wander in circles. We can not stop on lap 6.

The Israelites were going to battle against the city of Jericho but the gates were securely barred. No one could go in or out. Essentially, everything was on lock down. Do you ever feel that way? Like all doors are shut and you can’t find an ounce of hope no matter what gate you come to?

Before a single thing happened, before a single brick fell from the city wall, before they took a single step in battle, the Lord told Joshua, “See, I have delivered Jericho into your hands.”

From their eyes, the battle was just beginning. From God’s perspective the glory was His and the battle was won. He is the God of Alreadys even when we’re in the thick of it.

He tells them they will win but still, they must have thought, “Okay, cool God. That’s fantastic news and thank you so much. But if I may, how exactly do we go about this whole thing? I mean, it’s great that we come out victorious but, umm, how?”

He told them to march around the wall of Jericho in silence. Thousands and thousands of people lined up to walk around the city wall. After completing their lap around everyone stopped and settled in to sleep. Don’t you just wonder what they were thinking?

“Y’all, nothing happened. Maybe God forgot?” “I wonder if we misheard what God said…” “Do you think we did it wrong? Maybe messed up somehow?” “This is totally not how I saw this going down. Can we just do something now?”

They walked in silence and slept in the dark, only to get up the next day and do it all over again. It’s not like a brick fell with every lap around. They saw no progress and it must have all felt so weird, so pointless.

But they did it because God called them to it and His ways are good. They could have stopped on day 4 or 5 or 6 but oh, what if they had?

Because the walls fell on day 7.

Not a brick or a portion of the wall or a gate opening up. The entire wall all the way around the city just came crashing down.

They let out a shout and in a way that only God could receive the glory, He won the victory. They kept walking, He did the winning.

I’m not sure what lap you’re on. Maybe you’ve been walking for months or years and taking one more step seems impossible. I don’t know the battle you’re facing but I know the One who can bring the walls crashing down.

It probably won’t be by your might. It probably won’t bring you glory. And really, I doubt you’ll care one iota because when the walls come crashing down the only song to be sung is one of praise to He who wins it all. 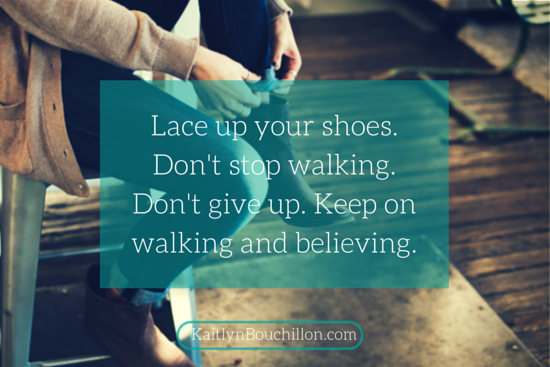 Lace up your shoes. Don’t stop walking. Don’t give up on day 6. We don’t know when the walls will fall but until God tells us anything different, we must keep on walking and believing.

It may be quiet for a while. You might lie in darkness and wonder what He’s up to. But there is a day 7.

*My personal story of day 7. I promise for realz, I wanted to give up on day 5 and 6 but oh friends… I would have missed out on so much of His goodness.

*If you’re willing, share below in the comments with me… are you still walking? Celebrating day 7? Have an encouraging word for someone entering the battle or continuing to walk? Please feel free to leave it below.